As the weather cools off, leaves turn colors and pumpkin-flavored everything appears so do some unwanted guests. Spiders. While fake spider webs can help you win the best-decorated house for Halloween, real spider webs and egg sacks will frighten away trick or treaters and are much more difficult to remove.

What spiders to watch for

There are several specimens native to the Pacific Northwest. There are 4 varieties of spiders that appear around homes; Hobo  (Eratigena Agrestis), Giant House (Eratigena atrica), Bold Jumping (Phidippus Audax), and American House (Parasteatoda Tepidarorum). In order to tell these apart, the distinguishing features are the type of web and physical appearance. Hobo spiders have a painful bite that often results in swelling and discomfort but can usually be taken care of at home. In some rare cases, however, it’s believed that hobo spiders have a necrotizing bite, meaning it destroys the tissue where the fangs make contact. Giant House, Jumping, and American house spiders can all be frightening but are harmless.

Most webs that appear around homes come from Hobo and Giant house spiders. Hobo’s webs are tightly spun in a funnel shape. These webs usually appear on the ground level, especially in yards, around hoe foundations and crawl space vents. Giant houses are flat and messy made out of threads that aren’t sticky. They prefer to build webs in corners of both ceilings and floors, especially near windows. American houses build flat webs in hidden spots of homes, areas like the basement, attic and behind appliances. Jumping spiders chase down their prey and don’t build webs. They do however create egg sacks that often appear in the crevasses of siding. 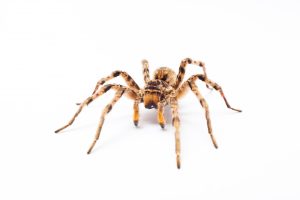 Hobo and giant house spiders are most similar in appearance. They are both about 11-14 mm in size and brown color. There are several distinct differences between the two. Hoboes have no dark color bands on their legs, unlike most similar spiders. They also have a light stripe that runs down their abdomen with light spots along with it. Finally, unlike the giant house spider, they have a small round sac on each fang where the venom resides. Jumping spiders are 4-18mm in length. They appear to have black hair with a white dot or line along their abdomen. American house spiders are 4-6mm long and are brown with black and white spots.

Behavior in the fall

By the time October hits most spiders have completed their mating season and babies mature. The weather also begins to cool off and they move indoors in search of warmth and food. The best way to prevent these unwanted guests from making nests on or in your home is by using a professional pest control service. They have products that both repel and eliminate spiders throughout your property.